Remember Four Square, that game with the bouncy red ball you played with your friends back in elementary school? Your school probably had a playing area painted in white on its blacktop – or at least marked out with chalk or tape.

Or you might know the game by one of its other names, like Box Ball or King’s Corners. It has been around since the early 1900s after all.

Regardless of what you call it, Four Square is a lot of fun and surprisingly beneficial for kids, which might make you feel better the next time your kids want to stay out on the playground longer.

Four Square Is Great Fun and Great for Development 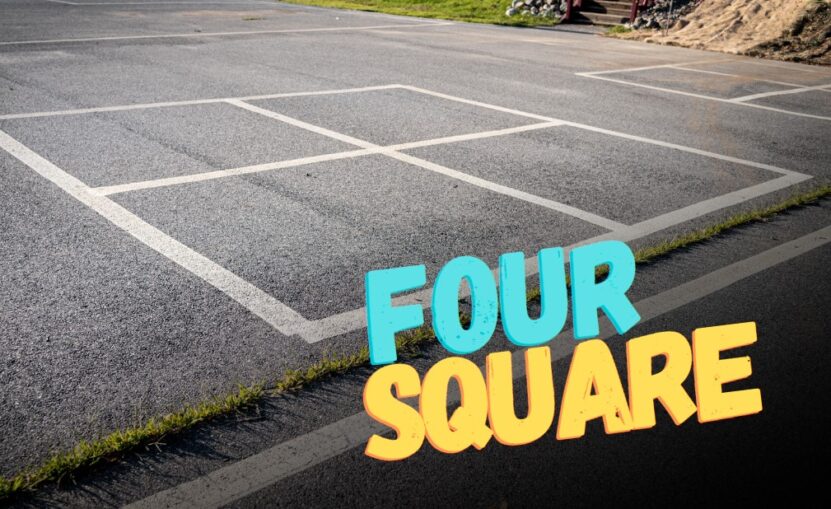 Here are just a few of the benefits of the game:

Playing Four Square helps develop your kids’ hand-eye coordination and concentration. This is the type of ability kids develop when they catch a ball and/or hit one with a bat, but its benefits go far beyond sports.

Hand-eye coordination is vital for activities that utilize eye-tracking and eye-guiding skills, like reading and writing, and its use of it develops the areas of the brain responsible for focus and concentration. This has obvious applications to kids’ schoolwork and ability to learn. So it’s a win-win situation for you and your kids: they get to play ball and you get the satisfaction of knowing they may do better in school as a result.

2. Child learns to stretch and flex their body 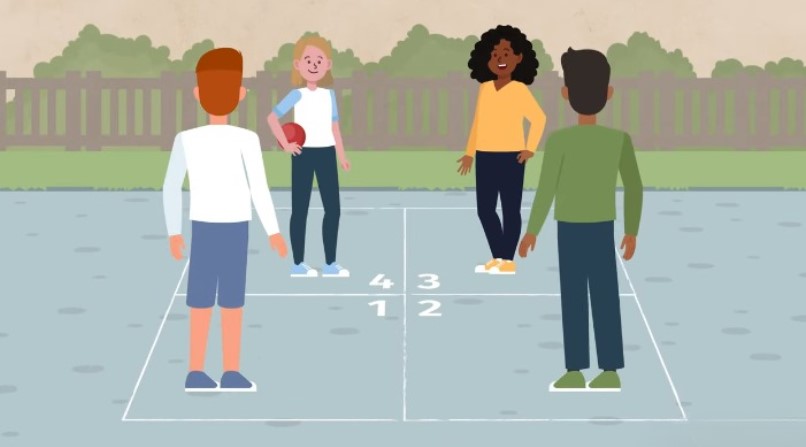 As they serve and bounce the ball and move about their square in Four Square, your child learns to stretch and flex their body. This in turn improves their flexibility, making them less prone to: injury on the playground, developing poor posture, and suffering from cardiovascular disease later in life. Flexible and agile, your kids will feel calmer and more confident from the inside out after playing Four Square.

Four Square helps improve proprioception, the body’s ability to react to outside stimuli to move, balance, and position itself – since in the game the body’s movements need to be coordinated as players move, catch, and pass the ball. Well-developed proprioception helps children know how their bodies and limbs are affecting the world around them.

It can be great for helping kids with the following activities (aren’t you glad?): closing a door with the right amount of force, moving around in a crowded hallway without bumping into others, and staying balanced on their feet without knocking things over.

A child with poorly developed motor skills may feel awkward at school and may avoid participating in games or other physical activities. This can have lifelong effects on their health and well-being, yet bouncing the ball in a simple game of Four Square can have huge benefits for their motor skills and their confidence.

Finally, it helps children use and improve their social skills, including cooperation and self-regulation – by requiring them to work together to set and follow rules, such as what type of “moves” and throwing techniques will be allowed in the game, and have fun together. A child who learns to honor fair play on the playground today is more likely to do so as an adult as well.

This is an impressive list of benefits for a simple ball game and a great reason for you to encourage your child to play Four Square and similar games with their playground ball. Your kids get to have fun, and you can feel good knowing that they’re taking part in a beneficial, enriching activity.

How to Play Four Square 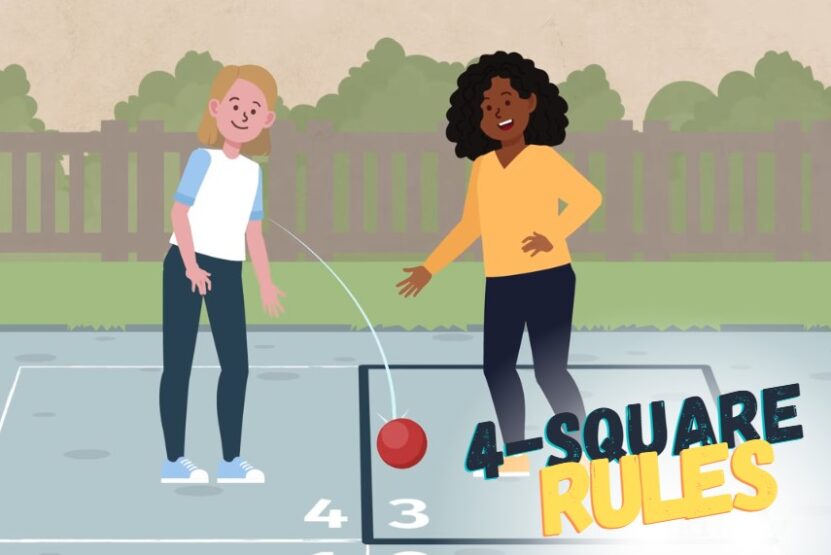 Playing Four Square with kids is a great way to engage in physical activity and have some fun. It is a game that can be played by any age group and can be enjoyed by both children and adults alike.

The simple rules and easy setup make it a great game for kids to play together and have a good time. It is also a great way to teach children about important concepts such as strategy and coordination.

1. Setting Up the Court

Before you can begin playing, you need to make sure the court is properly marked out. The court should be a square divided into four equal sections. Each section should also be marked with a different number.

Position the court in a flat, open area and make sure it is large enough for at least two players. Set up a playground ball or other appropriately sized ball for the game. Make sure to have plenty of chalk or tape to mark out the court, and be sure to bring a few extra balls in case the game becomes more popular than expected.

2. Rules of the Game

This game is perfect for large groups of kids who enjoy playing games together. The rules of Four Square are simple and easy to learn. The basic idea of the game is to keep a square-shaped ball bouncing within a four-square court.

The court is divided into four equal squares, each one marked with a different number. Players must hit the ball with their hands and keep it bouncing within their own square. The goal is to pass the ball to other players and to avoid getting eliminated by having the ball bounce out of their square.

The game is fast-paced and requires quick reflexes and good hand-eye coordination. In order to keep the game fair, there are a few rules that must be followed. These include the following: No kicking or throwing the ball, no double-bouncing the ball, no standing in the other player’s squares, and no hitting the ball with more than one hand. By following these simple rules, kids can enjoy a fun and exciting game of Four Square.

Four square is a popular game among kids that is easy to set up and can be played both indoors and outdoors. To play, you will need a flat surface and four players. The players divide into four teams and take turns standing in each of the four squares. One player, typically the youngest or least experienced, serves the ball to the second square.

The second player then hits the ball into the third square, and so on. The goal of the game is to keep the ball in play as long as possible. If a player fails to hit the ball into the next square, they are out and the game continues with the remaining players. The game is over when one player is left in the square. This player is the winner.

It is important to keep the ball inflated all the time, so you can keep a good bounce. 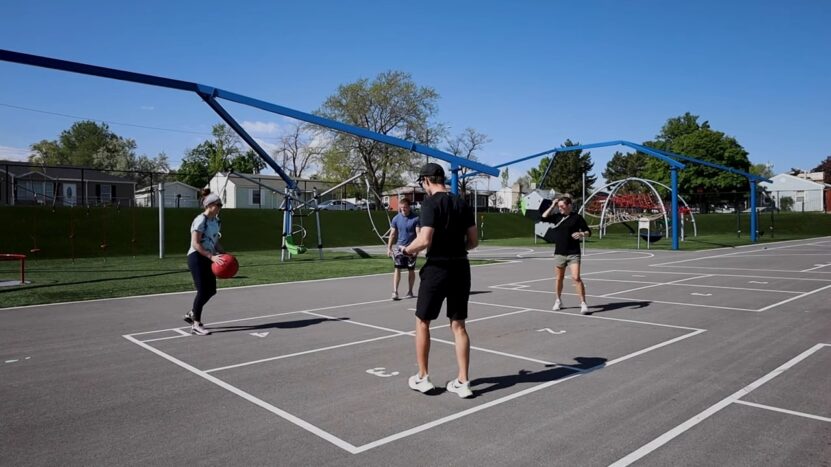 The main strategies to win include creating a court and setting up the rules, teaching proper technique and footwork, encouraging fair play and sportsmanship, and introducing variations to the game.

Creating a four square court with lines and cones will help keep the game organized and provide a safe playing area. Establishing the rules of the game is also essential to ensure fair play among the players. Teaching proper technique and footwork to the players can help them hit the ball correctly and accurately.

Encouraging fair play and sportsmanship among the players is also important so that everyone respects each other and plays fairly. Additionally, introducing variations to the game can help keep the game exciting for the players. By using these strategies, players can enjoy an exciting and fair game of four square.

5. Tips for Playing with Kids

Four Square requires very little equipment and can be played with just a few players or an entire group. Here are some tips to help you have an enjoyable game with your kids.

First, make sure the court is properly marked out and that your kids know the rules. Second, keep the game as simple as possible so that all players can understand how to play. Third, encourage your kids to be creative and come up with their own variations of the game. Fourth, make sure to keep the game fair by rotating players in and out of the game.

Lastly, keep your kids motivated by giving them positive reinforcement when they do well and encouraging them to try their best.

6. Variations of the Game

Playing Four Square with kids is a great way to encourage physical activity and social interaction. There are many variations of the game that can be used to keep the game fresh and exciting. First, you can have teams of four players or have a free-for-all game with as many as eight players.

You can also play with different balls such as a beach ball, soccer ball or tennis ball. You can even choose to have different rules depending on the age and skill level of the players. For example, younger children can have a rule that they must keep the ball bouncing between their hands before it hits the ground.

Older children can have a rule where the ball must be hit with a racket if it touches the ground before it reaches the square. These variations will keep the game challenging and fun for all players.